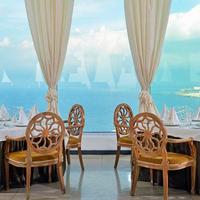 Considered the most “superlative” hotel: the tallest, the best located, the most rooms, the biggest rooms, the most meeting rooms and biggest meeting rooms, the most cosmopolitan and the most centrally located Meliá Cuba hotel in Havana. Combining art with a convention style and leisure ambience, while offering great value for money. An architecturally important building with 25 floors in 1950s style, the iconic Tryp Habana Libre is an reference point in the city for events and meetings, distinguished by its central location, decoration including works of art by well-known Cuban artists, and panoramic views of the city and the sea thanks to a location 137 metres above sea level. This four star city hotel is located in the centre of Havana, in the popular area of La Rampa in Vedado, and near cinemas, theatres, the famous Coppelia ice cream parlour, Havana University, shopping malls and other tourist attractions. Its façade is covered by a large ceramic mural by the renowned Cuban artist Amelia Peláez and its urban interior gives it a casually elegant atmosphere.

Does Tryp Habana Libre have special cancellation policies due to coronavirus (COVID-19)?

Guests traveling with new or existing direct bookings for stays at Tryp Habana Libre through June 30, 2020 will have their cancellation or change penalties waived up to 24 hours prior to arrival. For more information, visit the Wyndham Group Response to COVID-19 page.

Where is Tryp Habana Libre located?

When is check-in time and check-out time at Tryp Habana Libre?

No, Tryp Habana Libre does not offer free Wi-Fi.

No, Tryp Habana Libre does not offer free parking.

How far is Tryp Habana Libre from the airport?

Does Tryp Habana Libre have a pool?

No, Tryp Habana Libre does not have a pool onsite.

Learn about Havana on KAYAK