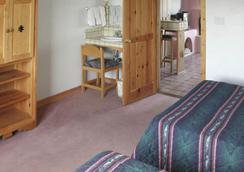 Cheaper
Average
Higher
Based on average prices of 3-star hotels.
Enter your desired dates in the search form directly above to see room rates for this hotel.

With a stay at Sun God Lodge in Taos, you'll be in the business district, within a 5-minute drive of Taos Plaza and Kit Carson Home and Museum. Featured amenities include express check-out and coffee/tea in a common area. Free self parking is available onsite.

Where is Sun God Lodge located?

When is check-in time and check-out time at Sun God Lodge?

No, Sun God Lodge does not offer free parking.

How far is Sun God Lodge from the airport?

Can you bring pets to Sun God Lodge?

Does Sun God Lodge have a pool?

No, Sun God Lodge does not have a pool onsite.

“The woman at the front desk was wonderful!”
“Easy access and convenient location.”
“"Great value for the low rate in a place like Taos, NM."”
“"Conveniently located, friendly staff"”
“The room was clean.”
“The location was great”
“Good value for cost.”
“Across the street from Walmart.”