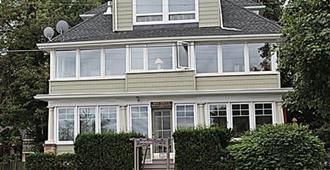 Rated #5
Rose Arden Bed & Breakfast
9.3
Excellent 9.3
Based on 37 reviews
Details
Reviews
$120
View Deal
Homewood Suites by Hilton Hamilton, Ontario, Canada
View all details
Cleanliness
9.1
Comfort
9.0
Facilities
9.0
Location
8.8
Overall
8.6
Overall 8.7 Excellent
Based on 527 reviews
All reviews
Cleanliness
9.1
Comfort
9.0
Location
8.8
Services
8.7
Staff
8.8
Good 6.2
Pros: The one bedroom suite was quiet, clean (except for slightly smelly water in the ice bucket), and big enough for us to spread out (we have a very light sleeper of a daughter, I'm seven and a half months pregnant and have to sleep sitting up with a pile of pillows, and my husband has health issues that make sleep difficult for him).
Cons: We arrived around 12:30 at night. I was nearly too tired to stand when we checked in, and obviously very pregnant. Check in was fine until I asked for a luggage cart. They didn't know where any were right then, and didn't feel like looking for any, apparently. Knock-off Red Roof Inns have luggage carts. The woman who checked us in said to park in the basement ($12.99) and bring our stuff up that way. Knowing that we had a sleeping toddler, a big cooler, and a lot of odds and ends that had to come up with us, I asked, well, is it faster and easier to bring things in through the lobby doors? No, she assured me, the elevator is closer in parking. Here it's all the way down the hall. Parking was a byzantine nightmare. It's not a lot designed for consumer use, but clearly a parking garage for valet use. You can tell because of the double parking spaces, where people parking on their own would be left parked in but valets can juggle cars, and because of the huge columns everywhere, and because the spaces are way too narrow for people who still have to unload luggage. Many of the more expensive cars were parked across two spaces (of course), to prevent being hit or scratched, so there was literally one space left. That space took us about 15 minutes to find. Then there was the matter of unloading and lugging everything through the 85 degree heat to the distant elevator, sad and sleepy toddler in my arms while my hubby carried way too much. To summarize, parking and then unloading took an additional 45 minutes, when we were already beyond exhausted. Someone should have offered to help us bring up our luggage through the lobby doors, and then I could have put the toddler back to sleep while my husband parked. Would have been much faster. But for whatever reason, they didn't want us to bring our stuff through the lobby. Or they just weren't thinking. I don't know. As often happens, my husband had difficulty sleeping. I called down at 10:30 the next morning to to ask for a delayed/extended check out, and was told that it was impossible by someone who was brusque and clearly in a bad mood. I woke him up so we could be ready to leave on time. On a whim, I called back at 11:30 and asked if it would be OK if we stayed until 1:00, the usual delayed checkout time, and this time was told yes. He went back to sleep for an hour. As I checked out, I explained my disappointment with the lack of luggage carts, the dishonesty about the ease of unloading from the basement parking garage, the fact that no one had volunteered to help at all (for context, I'm pregnant enough now that people volunteer to carry two grocery bags out to the car, a much easier task--I don't take them up on it, but then again, it's not usually past midnight when I go grocery shopping), and that the first person I called about delayed check out had been so rude and had denied it reflexively. The woman behind the desk in the morning was politely very defensive, but not helpful.
Excellent 10.0
Pros: Clean, bid rooms 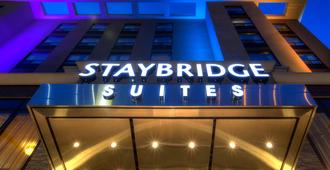 Rated #8
Staybridge Suites Hamilton - Downtown
8.5
Excellent 8.5
Based on 260 reviews
Details
Reviews
$133
View Deal
Courtyard by Marriott Hamilton
View all details
Cleanliness
9.0
Comfort
8.9
Facilities
8.0
Food
0.0
Location
8.8
Overall 8.4 Excellent
Based on 183 reviews
All reviews
Cleanliness
9.0
Comfort
9.0
Location
8.8
Services
8.5
Staff
8.8
Excellent 10.0
Pros: How the staff welcomes your, talk to you with respect, understand, clean
Cons: I loved everything on the Hotel, it the best hotel
Excellent 10.0
Pros: Very beautiful lovely hotel
Excellent 10.0
Pros: Close to Hamilton Airport.
Cons: Entry and egress are not easy due to busy street and construction.
Excellent 10.0
Pros: Beautiful and clean and convenient for us
Cons: None at all. In the future I will choose to stay in the same hotel for sure
Good 7.0
Cons: Very average. No included breakfast. Frankly, overpriced for what they offered and the location 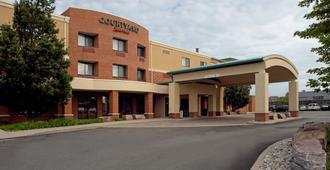 Rated #9
Courtyard by Marriott Hamilton
8.4
Excellent 8.4
Based on 183 reviews
Details
Reviews
$143
View Deal
Residence & Conference Centre - Hamilton
View all details
Cleanliness
8.2
Comfort
8.0
Facilities
8.4
Location
8.1
Overall
9.0
Overall 8.2 Excellent
Based on 325 reviews
All reviews
Cleanliness
8.2
Comfort
8.0
Location
8.1
Services
7.9
Staff
8.6
Excellent 8.0
Pros: Excellent location.The rooms are fairly basic but clean and comfortable.For 75$ plus a continental breakfast a terrific deal
Okay 5.3
Pros: We had reserved a room with two double beds. It turned out to be a suite with seperate rooms and a kitchen area!
Cons: This is a summer dorm and guest lodging facility on the campus of Mohawk University- not a hotel! There are very few signs even marking its location, and it lacks commercial, polished touches. It is like staying in a dorm, because it is ! Rated #14
Haven Inn
5.6
Okay 5.6
Based on 11 reviews
Details
Reviews
$76
View Deal
Super 8 by Wyndham Mt Hope Hamilton Intl Arpt ON
View all details
Cleanliness
5.1
Comfort
5.3
Facilities
5.6
Location
6.2
Overall
6.0
Overall 6.0 Good
Based on 81 reviews
Okay 5.7
Pros: Location to Hamilton Airport was excellent. Room was clean and smelled okay. I wasn't there long enough to check out their facilities
Cons: For some reason I could not connect to the internet and the room phone did not work so I couldn't phone the front desk to see if I had the correct password. It was late and I had three hours before I had to get up for my flight, so I got ahold of family back home to check-in to my flight for me.
Excellent 10.0
Pros: proximity to airport for early morning flight, cleanliness, courteous staff, early opening for continental breakfast
Cons: Need more road signs to locate hotel
Mediocre 2.0
Pros: IT WAS CLOSE TO THE AIRPORT FREE WIFI
Cons: ROOMS SMELL MUSTY STAINS THROUGHOUT CARPET TERRIBLE BED (FEEL SPRINGS ) FRONT DESK STAFF DID NOT ORDER MY CAB FOR AM SHUTTLE CONTINETAL BREAKFAST A CLOSE SECOND TO EATING OUT OF A DUMPSTER. SEVERLY OVER PRICED ROOM!!!! SCREEN DOOR TORN
Good 7.4
Pros: Value for money
Cons: Basic breakfast. Very small room. Need to be updated. 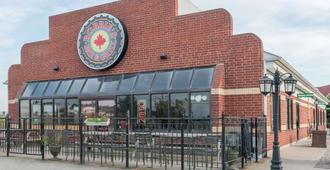 FAQs when booking a hotel near Toronto Hamilton airport

How much is a cheap hotel near Toronto Hamilton airport?

KAYAK users have found double rooms near Toronto Hamilton airport for as cheap as $57 in the last 3 days. The average price is $105.

How much is a cheap hotel near Toronto Hamilton airport for tonight?

How much is a cheap hotel near Toronto Hamilton airport for this weekend?

How can I find hotels near Toronto Hamilton airport?

Take a look at our extensive airport hotel Heatmaps to find the best hotels near Toronto Hamilton airport.

Where to stay in Toronto?

Our map will help you find the perfect place to stay close to Toronto Hamilton airport by showing you the exact location of each hotel.