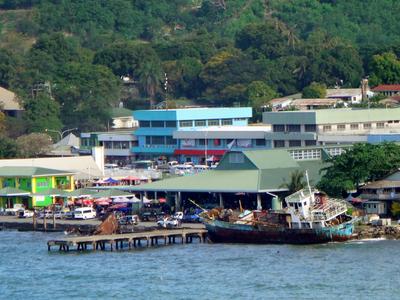 Top tips for finding cheap flights to the Solomon Islands

Are there Solomon Islands travel restrictions currently due to Coronavirus?


Entry restrictions
All countries with the exception of Australia, New Zealand, China, Taiwan and neighboring South Pacific island nations (not Papua New Guinea or French Polynesia) have been designated by Solomon Islands as ‘high risk’ for COVID-19. Prospective travelers who have been in a ‘high risk’ country must spend 28 days in a low risk country before being considered eligible to enter Solomon Islands.
Travelers originating in the UK or the US will not be permitted entry to Solomon Islands.
Prospective travelers must submit request to enter through the Office of the Secretary to the Prime Minister or the Ministry of Foreign Affairs and External Trad by writing to the head of the government’s COVID-19 committee, Permanent Secretary James Remobatu (jremobatu@pmc.gov.sb). Prospective travelers should clearly describe any special or compelling circumstances.

Entry requirements
Travelers will have to show evidence of at least 3 negative tests prior to traveling. These tests should be undertaken 21 days before travel (first test) 12-14 days before travel (second test) and 48 hours before travel (third test).
Travelers must present a completed Traveler’s Public Health Declaration Card and provide full details of their place of stay, travel itinerary and current personal contact details in Solomon Islands.

How long is the flight to the Solomon Islands?

An average nonstop flight from the United States to the Solomon Islands takes 38h 27m, covering a distance of 6550 miles. The most popular route is Honolulu - Honiara with an average flight time of 50h 25m.

What is the cheapest flight to the Solomon Islands?

What are the most popular destinations in the Solomon Islands?

Pros: "A plane I could sleep on...very comfortable!"

Pros: "The aircraft is very new and comfortable! The boarding is orderly and well managed"
Cons: "Free wifi onboard!"

Pros: "super friendly crew making sure u had snacks and drinks ,smiling the whole time. thank.you!"
Cons: "maybe if i could hve plugged inmy own headphines but no big deal. thank you!"

Pros: "The staff was friendly and helpful."
Cons: "LAX has to get its remodeling completed. Getting to Tom Bradley International terminal and taking the bus to our plane was not impressive. The food on Fiji Air is not good."

Pros: "Nothing was real impressive but nothing really bad for a budget airline."
Cons: "the food, entertainment options (movies) the service including drinks, the plane itself and the overall airline could all be much better."

Pros: "I liked the complimententary pillows and blankets."
Cons: "The crew was not friendly at all. I had to ask for snacks from the crew in the back of the plane. The seats were not comfortable and the entertainment was dated and old."

Pros: "The crew were very friendly and professional. Economy seats were slightly better than most, but the configuration of the 2 seats was good 2 of us to have our own area. Food was good."
Cons: "Boarding was hectic and unorganized, but functional. Movies/TV shows were limited compared to other airlines. I am taller so seating in any economy seat is cramped at best."

Pros: "My flight to Los Angeles was great comfortable seats and the food was very good"
Cons: "Unfortunately my flight from Los Angeles to Christchurch was cancelled the plane had a mishap on the runway colliding with another plain so was booked on an Air New Zealand flight back to Auckland the following night it was good of Fiji air to put me up in the Crowne Plaza near airport lovely hotel"

Pros: "Had an extra seat to strech out."

Pros: "I love the workers, I love the entertainment. The pilot did a great job."

Pros: "They had vegetarian options at every in-flight meal. Heaven! Flight staff were all extremely attentive and polite."
Cons: "Seats are cramped (as with most budget travel) and entertainment options were not very good. Movies were mainly very old and games not very interesting."

Pros: "Boarded on time. Good flight. The curry chicken was spicy, but good. Concerns on weight totals for luggage for checked (50 lbs) and carry-on bag (15 lbs). Never weighed either bag. Was prepared though just in case they did weigh, as we’d read about $150 overweight surcharge."

Cons: "Too cold- The air con was pumping too high everyone was freezing"

Pros: "The cabin crew was very nice and liguids were given frequently."
Cons: "The seating needs more room for legs"

Pros: "The movie choices"
Cons: "It was freezing on the plane... Even with jackets and blankets on!"

Pros: "Good selection of entertainment."
Cons: "After many hours the seats were not too uncomfortable. But that's after 10 hours flying. It was nice that they reclined like they did. But the padding could have been better."

Pros: "the service. coffee and teas was very good. probably because of the Fiji kind attendants and water."

Pros: "Great choices for entertainment; food was hot; crew was excellent to the point of bringing a hot moist towel to wash face/hands with in the morning before serving breakfast; boarding went quickly with having 2 rows to fill in, not just one; the best, however, was the cabin crew bringing water consistently through the night to those that were awake. My husband even took a glass and held it for me while I was snuggled under the blanket. Kudos, crew!!"
Cons: "HA! For me to find something 'wrong' would be hard! Maybe the headphones didn't fit the head just right and couldn't hear equally well out of the speakers? Maybe a bit more leg room for my extra-tall husband?"

Cons: "The food was okay. For a long flight I was expecting more options."

Pros: "Fiji Airways is among the top airlines for the long haul routes. New aircraft, clean cabins, fine entertainment and the friendliest crew you can find. They are consistently great."

Cons: "There was no leg room. Also, the flight was about 1.5 hrs late departing, which almost caused me to miss my next flight."

Pros: "Getting seats as a stand by passenger."
Cons: "Connecting in LAX with waiting 20 minutes at the remote gate for the bus, the bus ride and waiting for luggage to clear customs is virtually impossible to go though and make the connection. Having literary run out of customs and being told you missed your boarding time and now you are on stand by is not happy making. American points to a Fiji airlines, Fiji airlines at American as the carrier."

Pros: "I like the entertainment options"
Cons: "Crew not careful during food/beverage service. Received a 2nd degree burn from tea accident due to getting spilled on"

Pros: "Was fine could have served more water/juice/soft drinks but overall was good"

Cons: "The food was not very good."

Pros: "Pleasantly surprised plenty of legroom and the service was great. Good value and would definitely fly with them again"

Cons: "I was not given a meal for dinner. When I asked they sheepishly looked away from me and told me that there would be a voucher when we landed. We did not get any voucher,nor did they make an announcement that they ran out of food and would not be able to feed half of the plane. I am extremely disappointed in how this was handled, as people next to me were given first class meals and I was given one piece of cheese and one cracker. In the morning for breakfast my meal almost didn't come, I had to ask for it. And when it was given to me it was already opened and messed with."

Pros: "very good service, no delays"
Cons: "would be nice to have more leg room"

Pros: "I'd seen some poor reviews but found the flight to be just fine. Decent economy seats for such a long flight, good service, food, and entertainment options."

Pros: "It was okay the plan was a bit small and uncomfortable for an international flight.."
Cons: "My luggge didn't make the flight...I had to wait almost two days. And the airport is not close to where I was staying. No one offer to compensate for the inconvenience. We had to leave to another island so we was in a rush for our luggage."

Pros: "I liked that there was breakfast on the plane"
Cons: "The seats weren't very adjustable or comfortable and there could have been more movie and tv selection for such a long flight"

Cons: "We get to LA for our connection and security says we need to check in again, and no one is at the fiji airways desk to check us in! The security guard sees this, lets us through to check in at the gate so we sprint there and 4 agents are standing around saying they are surprised we made it."

Pros: "Customer service was nice, the food was ehh."
Cons: "For an international flight, the seats were extremely tight. There could've been a few more movies to choose from."

Safety measures for airlines flying to the Solomon Islands

Daily cleaning, installation of cabin HEPA filters on flights to the Solomon Islands

Masks required on board, masks provided on flights to the Solomon Islands

Middle seats unavailable to book on flights to the Solomon Islands

Testing for antibodies, testing for symptoms for flights to the Solomon Islands

Flights to the Solomon Islands