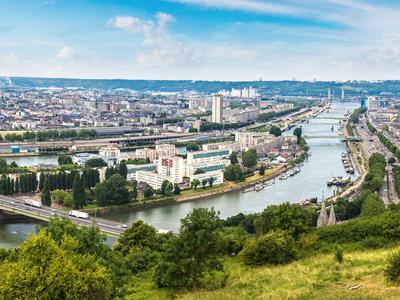 Are there Normandy travel restrictions currently due to Coronavirus?

France has updated its screening regulations. Arrivals by air routes will need to complete a ‘sworn statement’ certifying they are not suffering from COVID-19 symptoms and have not been in contact with confirmed cases in the preceding two weeks. Please see our Coronavirus (COVID-19) Travel Restrictions page for more information on restrictions worldwide.

How long is the flight to Normandy?

An average nonstop flight from the United States to Normandy takes 19h 17m, covering a distance of 4753 miles. The most popular route is Atlanta - Caen with an average flight time of 15h 20m.

What is the cheapest flight to Normandy?

What are the most popular destinations in Normandy?

Pros: "The seat was really comfortable and I was able to sleep the whole flight with no disturbance"
Cons: "N/A"

Pros: "Crew asked us if we’d like to move to an empty row to be more comfortable without us even requesting it."
Cons: "Bigger coffee cups? Really nothing to complain about. Everything I would expect from a flight. A++"

Cons: "2 hours delays from LAX to CDG then additional two hours delay from CDG to CAI, this is disappointing"

Cons: "Comfort plus seats need some work. Very thin padding on a hard seat. The leg rest needs to come up higher so you don’t slide down while semi reclined. Nice compromise between business and coach though."

Cons: "Seat angle adjustment was not the most comfortable for sleeping."

Cons: "Kayak updated me that my flight would be late. It wasn't. Missed it had to pay $700"

Pros: "Not much, seats are super uncomfortable"
Cons: "Better code sharing with KLM"

Cons: "First class bathroom could have been cleaner and wider - very narrow, hard to maneuver"

Cons: "the tray was broken and the water felt all over. the flight was 1 hr delayed. All of us stood the 1 hr waiting to know what's next. We could sit."

Pros: "Crew was solicitous."
Cons: "They didn't seat a couple with a baby together which put me in the unpleasant place of being asked to give up my bulkhead seat for a window seat."

Pros: "Crew was awesome!!"
Cons: "I paid extra for the seat, but there was a metal box under the seat in front of me that curtailed my ability to stow my carry bag, and my leg room. I am very diappointed that I paid above the normal seat charge as if there was a premium to this seat, but in reality it was a sb par seat."

Cons: "The flight delayed for 2xhours from Paris to Cincinnati"

Pros: "The crew was amazingly helpful. My son was having some anxiety and they went out their way to make him comfortable. They were the best!"

Pros: "1. The flight attendant staff was very polite and cheerful. 2. The plane was clean and comfortable."
Cons: "1.The entertainment monitor did not function well enough to be able to watch. 2.The headset only function on one ear. 3. You could not hear announcements over the PA system"

Cons: "Departure delayed, reschedules and then cancelled without any direct notification to us with 2 first class tickets !! If we didn’t have Kayak we would be sitting in the airport !,,"

Pros: "Short flight so I can't really complain. It was no frills, standard small aircraft with no high tech entertainment system. Seats were fairly comfortable"

Pros: "The size of the plane was nice. They had a good move selection. The vegan meal I was given was great."
Cons: "It was loud, cold, the food was just okay at least my vegan meal was the bomb but it would have been better had when we booked the flight it allowed me to also choose this option for my husband. Since he is vegan as well."

Pros: "More experienced, professional crew, better food and service."
Cons: "A screaming child for 8 hours (understood this is not their fault, but it did make the journey unpleasant). Old aircraft with small screens, no power etc."

Cons: "Entertainment screen did not work; in neighboring seat it could not be switched off when we wanted to sleep; sourly employees everywhere (re-booking counter an exception); food close not being edible and cold; I forgot my watch on when going through security in the Air France terminal; when I started to say "sorry" I was yelled at by the screener who said that she will do the talking; she sent me back through the scanner twice without my watch, then once more with the carry-on and made sure that I went to the end of a very long line to wait for another screening rather than having me just go through the scanner without my watch. Needless to say, there was nothing else suspicious about me once the watch was removed. Eager to exercise her power, the security person did not seem to consider that she slowed down a long line of people waiting to be screened. I should add that I am 73 yrs old grey haired female who has traveled a lot both for pleasure and business during my entire life, often to some difficult places and that I do not argue with or provoke those in power in a situation like this. The yelling and the sending me repeatedly through the scanner, which did not beep once the watch was removed, was beyond anything I had experienced anywhere else. The sending me to the very end of the line seemed outright spiteful. (I did miss the plane connection.)"

Pros: "Boarding this large plane went relatively quickly and orderly."
Cons: "Seats were tight and got a bit uncomfortable. This was a long flight. Could use a much better cushion."

Pros: "Nothing."
Cons: "Everything. The crew seemed to skip over me and my husband multiple times. So we sat there with garbage the whole flight. My entertainment was broken and they had no solution but giving me $30 to use at the duty free shop the same day as the flighty. I paid extra for premium seating in an exit row and that was their idea of fair compensation. The crew ran out of vegetarian food so I didn’t eat anything but cold stale bread. The crew was non-existent most of the flight."

Pros: "We got to the desk to check in and there was one person being served in front of us. He finished with him, turned and left the area through the dooor. No one came to help us for 15 minutes. Then they came out to answer the phone and said we were 10 minutes past the cut off and we could not fly."
Cons: "Staff just walked away while we were in line, the rudeness and mean attitude, they blamed us for being too late after ignoring us and made us late, they didn't offer an alternative flight until we asked. Overall, horrible customer service. Never been treated so rudely by people in the airlines industry in my entire 42 years of flying!"

Pros: "Faster"
Cons: "Waited a while before take off."

Pros: "The service was very professional."
Cons: "Everything went well."

Cons: "Flight cancelled because of weather"

Pros: "The quality of service from the staff and their courtesy. A great asset of the airline."
Cons: "My luggage was left behind - this despite my being lifetme platinum."

Pros: "In cabin crew was attentive and friendly. Food was good and came at good times. Middle bathroom on Airbus 380 was big and comfy."
Cons: "Boarding was not too well organized and I followed Security's direction who put me in wrong line and I wasn't able to board with my priority group. Sitting in exit row with no floor storage so this delay made it hard to find overhead storage above my seat. (Grrrr) Entertainment system didn't work which made the flight feel LOOONG. (They offered an in-flight credit, but I'd paid for premium exit row seat and had to choose between moving to working system in crowded middle seat or keep premium, exit seat. I decided to have them move me to a seat with a working entertainment system, which were available and they'd offered, but never happened.) When I got home, I discovered the gift I purchased with in-flight credit and my own money wasn't the one I'd requested from Duty Free catalog so now I have to figure out how to solve this problem. (COULDN'T GET IT RIGHT.) Premium exit row seat was narrow, due to in-seat tray table & entertainment system, but seatbelt mounts and thinly padded seat made it even more uncomfortable on a long flight."

Pros: "Staff was nice"
Cons: "Very cramped. Poor leg room also with.metal bars under seats that further. Limited foot room. Terrible options in movies. The seats in front of us reclined so far that I couldn’t do anything but stare at the back of the seat anyway."

Pros: "You can't go wrong with delta when it comes to customer satisfation. It's the primary reason I'm okay with paying extra money for delta flights"

Pros: "Flight went smoothly"
Cons: "Flight left late The seats are small and crowded There are no entertainment options"

Pros: "Crew and boarding, not much else to talk about. Late for take off, but made it on time"
Cons: "Late leaving and arriving."

Cons: "We were rebooked, which understandably happens for any number of reasons. However, we were not informed or asked about our preference until our luggage was checked through! The staff especially in Chicago where we began this awful experience couldn't care less about our situation. Then AIr France lost our luggage and provided no help in locating them. We had to rely on folks who had friends working in Zagreb Airport to locate them. Air France is incompetent, insensitive and unprofessional. If you have an important trip avoid Air France - they treat you like captives not customers."

Pros: "Great food, pleasant crew."
Cons: "Comfort economy okis seats are wide, with good legroom, but did not recline and hard as a rock. Entertainment system hard to use, finding movies very tedious."

Pros: "I enjoyed the food, the crew's friendliness in First Class and the boarding process."
Cons: "The wi-fi did not work on our flight"

Pros: "The food was great. Very filling and hot foods were hot and cooked thoroughly. For our 8 hour flight we were served 2 meals and snacks and plenty of hot drinks which was nice.The entertainment was great got to watch movies and play games and also learn language through games."
Cons: "It was very hot in there probably hotter than it should be. Not much air flow I was sweating the whole flight. Because of this I couldn't sleep it was kinda miserable not gonna lie."

Pros: "There were 4 of us flying from Atlanta, there was a great amount of leg room, tvs were nice, remote control for the tv fit into the seat, the way the plane was laid out, the 4 of us sat in a middle row, which meant no window seat (which my sister was disappointed), dinner options were great, wine was complementary"
Cons: "My only problem was that there wasn't any air flow and until someone told them how hot they think it is, it was a very sweaty situation. I couldn't sleep because of how hot it was and I didn't think to tell the crew because I didn't know they would care."

Pros: "Same as above, the crew was very friendly and the food was great."
Cons: "Seating was cramped and uncomfortable for a tall person."