Search hundreds of travel sites at once for deals on flights to French Guiana. Bundle your flight + hotel and save! 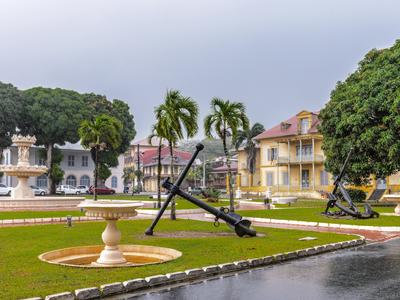 How long is the flight to French Guiana?

An average nonstop flight from the United States to French Guiana takes 30h 20m, covering a distance of 2809 miles. The most popular route is New York - Cayenne with an average flight time of 30h 20m.

What is the cheapest flight to French Guiana?

What is the most popular destination in French Guiana?

Based on KAYAK flight searches, the most popular destination is Cayenne (100% of total searches to French Guiana).

Pros: "The crew did its best to make up for the fact that the special meal I ordered was inedible."
Cons: "See previous"

Pros: "Crew was solicitous."
Cons: "They didn't seat a couple with a baby together which put me in the unpleasant place of being asked to give up my bulkhead seat for a window seat."

Cons: "Train your ground crew. Our luggage was not placed on our flight from Paris to Amsterdam and were sent to Amsterdam on separate planes. My husband’s medication was in his bag. This was a great inconvenience for us. Never again on Air Canada. I suggest you explore the baggage process used by Delta."

Cons: "Seat was super uncomfortable. Could not fit in my legs at all, could not recline it enough. Maybe sufficient for a one hour flight, definitely not on an intercontinental flight."

Cons: "Too much time spent at boarding. On luggage missing."

Pros: "The crew was helpful and accommodating"
Cons: "The flight was delayed, missed connection, and lost baggage. Subpar."

Pros: "Crew was very nice and the food was excellent"

Pros: "The crew was very careful"

Pros: "Food and entertainment was awesome"
Cons: "It's awfull to sleep. Very unconfortable."

Pros: "Really liked the new touch screens (with very good responsiveness). Also liked the food selection (the champagne was nice, so was the menu we were given)."

Pros: "I was given a great seat and the food was OK- not the Air France food of 5 years ago but still good"
Cons: "I didn't really use the in flight entertainment - the usual movies, tv etc"

Cons: "I ordered Asian Vegetarian Meal. But they served me only pasta."

Pros: "Quick and efficient not lying more to say or critique."
Cons: "Coffee and a bread roll as a snack??"

Cons: "My luggage was lost in Paris. Now I need to wait still."

Pros: "The food was okay and the staff were friendly."
Cons: "My seat and several others around me were broken so that they would fall all the way back if we leaned back at all. The entertainment system kept crashing and forgetting what shows everyone on board we’re watching. There were no air vents to control. The games crashed constantly. The usb hubs didn’t work."

Pros: "Food was good. Crew nice and professional."
Cons: "Landing was not so smooth."

Cons: "Staff where so unhelpful that I missed my flight and then refused to offer any assistance as to how I could remedy this situation. This cost me over €180 which is a weeks food and stay for me. Don't fly with these guys or with air Croatia."

Cons: "It is very difficult to get around CDG airport with a disabled person. There is no shuttle. By the time we got to check in, we were ten minutes late. They would not check us in, and we paid over $700 to change tickets to the next flight. When I complained, I was told to stop being rude or I would get no ticket at all. My mother is 94 years old and we did the best we could given the circumstance."

Pros: "Very helpful cabin crew and did well to communicate in English to me. Flight was on time and landed ahead of schedule"
Cons: "Entertainment system had to be rebooted as it did not work Small screen handset was not working for the entire flight food selection was not as big as KLM or China Eastern Bathroom on board was smaller than KLM or China Eastern which meant changing into more comfortable clothing for the night flight"

Pros: "Plane was comfortable and new."
Cons: "Nothing really."

Cons: "We paid for Business Class from JFK to TLV. The flight to Tel Aviv was in a small plane with 3 across seats that hardly reclined. We are most unhappy and will complain to American Express Platinum Card."

Pros: "Faster"
Cons: "Waited a while before take off."

Cons: "Screen broke half way through flight. Food was poor"

Pros: "Yelling, cheering and literally rolling in the aisle made for a really annoying flight"
Cons: "Infusions bad behavior. Also, flight number was changed and AF. Was understaffed to handle questions on squirrelly luggage check."

Pros: "Only the cabin crew was good."
Cons: "It was the worst flight that I ever had, the seats are extremely uncomfortable, no TV, the food was terrible."

Pros: "Plenty of seat space"
Cons: "In flight entertainment and call button was broken ... crew never passes to ask if you’d like water."

Pros: "On time after latish start"
Cons: "Staff took carryon bags even for skypriority even tho lots of room in overhead, allegedly to speed deplaning. Nowarning to repack. Infuriating and stubborn staff!"

Cons: "only there were del;ay at JFK"

Cons: "They lost my luggage"

Cons: "Business Passngers have to wait in the same bus to board the flight what is the point then...."

Pros: "Crew and boarding, not much else to talk about. Late for take off, but made it on time"
Cons: "Late leaving and arriving."

Pros: "Crew was friendly and polite, both beverages and an excellent lunch was offered."
Cons: "A delay was not ideal but nothing to worry about since the flight arrived on time."

Pros: "The flight attendant was very nice to me. TV was very good. space was enough ."
Cons: "We had to pay for wi fi."

Pros: "Lovely crew, clean toilets"
Cons: "It's an a380, stains everywhere, aisles between seats narrow even for business, caos at CDG, no clear queues, ground staff shout at passengers, food selection good but huge gap between describtion and reality, in JFK we waited for 30 minutes cause the docking spot was too narrow for the captain, sky priority? The economy got their bags before 1st and business."

Pros: "Best flight I've ever flown. Blankets and pillows provided with many options for movies."

Pros: "movies were great, watched a lot of them food, while nothing to write home about, was at least tasty and not inedible the staff was great, friendly, welcoming, hard working loved that we could have wine and snacks"
Cons: "we had paid for the exit row and had a luxurious amount of room. But when we tried to sleep, our fellow passengers came and stood at our feet and talked so loudly that we could not possibly sleep. They stayed there for more than an hour. Would have loved for the staff to maybe ask them to tone it down, if not move."

Masks required on board, masks provided on flights to French Guiana

Middle seats unavailable to book on flights to French Guiana

Testing for antibodies, testing for symptoms for flights to French Guiana